Exhaustive tests have been performed to determine if the VAM (endo) fungal spores in our products are viable not only throughout the production stage, but all the way to the distributor shelf. This involves testing viability after production, packaging, shipment and storage conditions. This bulletin describes some of those trials.

A literature search was conducted to determine the temperature tolerances for VAM fungal spores. Reports from this search indicate that a temperature of 126oF (52.5oC) for 10 minutes is lethal to spores of certain VAM fungi. In other studies, temperatures as high as 112 oF (45 oC) for up to 24 hours did not affect VAM spore viability.  Ideal temperatures reported for long-term dry storage included room temperature down to  38 oF (4oC), with the lower temperature being better for a longer preservation period.

Two types of VAM fungal inocula were tested: VAM Cocktail spore mixture, and VAM root fragments.  These were all stored at  18oF (-8oC) for  5 days, then tested for viability by inoculating the roots of host plants and measuring the percent root colonization (infectivity).

Another sample of each inoculum was treated twice at 18oF (-8oC) , first for 5 days, and then for 3 days, with a two-hour thawing period between freezing treatments.  These were also tested for viability in the same way. The inocula were placed in glass test tubes with cap under dry condition for the freeze/thaw treatments. The results were compared to the infectivity of 3 control groups: uninoculated host plants, unfrozen VAM spore cocktail, and unfrozen VAM root fragments.

Infectivity of VAM Spore and Root Inoculum after Exposure to One or Two Freeze/Thaw Cycles*. The Average % of Root Colonization Across Four Replicates.

Conclusion: The results indicate that the infectivity of both VAM fungi spores and VAM root fragment inoculum were reduced (not eliminated) after freezing and thawing. The spores were significantly less susceptible to this freezing treatment than were VAM root inocula.  In conclusion, Lebanon Seaboard recommends that the VAM fungi inoculum products should not be exposed to freezing conditions for an extended period.

The inoculum was the standard VAM cocktail of 12-14-04 (9,235 spores/g) at two spore dosages: 100 and 300 spores per cup ( 0.108 g and 0.325 g of a 1:10 dilution of the cocktail). The freeze-thaw treatments were preformed from 12-9-05 to 12-11-05 and the pre-germinated corn seeds were planted on 12-13-05 (one seed per cup). Corn seedlings inoculated with 300 spores/seedling were processed for root colonization assessment on 1-17-06 (35 days of incubation) and those with 100 spores/seedling on 1-20-06. The medium ( soil sand mix) was lightly watered. Since the spores were placed in the medium, they were subjected to certain degree of humidity before the water was evaporated. We did not try to verify if the spores germinated under this condition.

The results below show that freeze-thawing reduced the viability significantly under the conditions tested. Spores in treatments which were subjected to 2 cycles of freeze-thawing lost almost all viability.

Samples of VAM fungi spore inoculum  in sealed plastic bags were stored for 10 days, one set at room temperature and the other at 120oF (48oC) in a temperature-controlled incubator.  Sealed plastic bags of mycorrhizal root fragments were treated the same way.  Four replicates were made of each treatment.  After 10-days, the content of each bag was assayed for its ability to form VAM on host plants.  The results are shown below:

Percent of Host Root Colonization By Spore and Root Inoculum After 10 Days Treatment at 120oF or Room Temperature. Average across 4 Replicates.

Conclusion: The results indicate that the infectivity of both VAM fungi spore and VAM root fragment inocula were reduced (but not eliminated) after prolonged heat exposure. The spores were significantly less susceptible to this heat treatment than VAM root inoculum.  Therefore, Lebanon Seaboard recommends that the VAM fungi inoculum products should not be exposed to extreme heat for prolonged periods.

An experiment was performed to determine the maximum temperatures experienced by ROOTS products during shipment by truck in the summer.  Boxes of ROOTS Injectable for Trees were rigged with Cole Parmer temperature sensor strips which recorded maximum temperature exposures from 100oF (38oC) through 150oF (66oC).  These strips were placed both inside the lid of the box or pail,  and inside the bulk product.  These samples were then shipped from Pittsburgh to various locations by UPS ground service in August and September 1997.  Locations included Bradenton, Florida (round trip); Atlanta, Georgia (one way); Pine Valley, California (round Trip); Frogmore, SC (one way); and Laward, Texas (round trip, both ways recorded).   The maximum temperatures recorded are shown in the chart below:

* A UPS strike during the test exposed some samples to 10 days extra shipping time.

Conclusion: The results indicate that the highest temperature recorded during transit was 110oF (43oC).  Most of the time, the temperature did not exceed 100o F (38oC).  Therefore, all products should survive shipping conditions.

A small trial was conducted in Pittsburgh to determine the ability of the heat from sunlight to conduct and permeate through the packaged products.  For this test, granular humate was used as the test material, since this is a major ingredient in many of our products.  Two 5-Lb samples of granular humate were packed in boxes.  These were stored for 6 days under refrigeration at 36oF.  The boxes were removed from refrigeration, and placed outdoors in the sun.  Temperatures were recorded hourly using a thermometer probe which penetrated into the center of each box.  Results are recorded below.

Hourly Temperature of Granular Humate in Two Size Boxes Exposed to the Sun on August 7, 1997 after Storage for 6 days under Refrigeration at 36oF (2oC).

Conclusion:  Results show that exposure to the sun supported an average temperature increase in the boxed product of about 6.8oF (3.8oC) per hour, even though the ambient air temperature increased only an average of 3.8oF (2.1oC) over four hours, before declining.  The products containing significant amounts of humate can be expected to increase in temperature steadily in response to radiant heat from the sun, with the contents of smaller boxes increasing in temperature faster and to a greater degree than larger boxes.  As a result of these tests, Lebanon Seaboard added statements such as “Do not expose to excessive heat or direct sunlight” to labels and directions sheets.

Although several periodic tests are made on product spore infectivity after production and packaging, the best data on VAM fungal spore viability was obtained from tests done with VAM fungal spore pellets used for reclamation.  Len Marrs, President of PHC Reclamation, Inc., received a shipment of VAM fungal spore pellets, but he did not use the entire order.  The unused pellets remained in boxes in storage in Salt Lake City, Utah for 16 months.   A test of the remaining pellets after 16 months of storage was conducted to determine their ability to form mycorrhiza on host plant roots.  The results are summarized below. 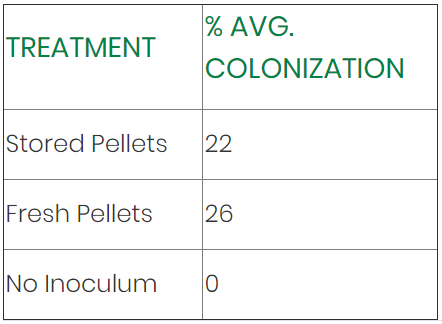 Conclusion: Spores in this formulation remained alive and effective after at least 16 months of storage.