Gray Leaf Spot (GLS) is commonly thought to be a disease associated with the cool-season grasses of ryegrass and tall fescue, but it has a rather destructive history with the warm-season grasses of St. Augustinegrass and kikuyugrass.  To make matters worse, the disease appears quite differently between cool-season and warm-season grasses.  GLS is caused by a fungal pathogen, Pyricularia grisea, which is quite destructive to all the turf it infests by killing the leaf blades.  Leaf infections can progress into the crown area, resulting in death of individual plants.  Moderate outbreaks of GLS result in clusters of thin, off-colored turf.  Severe outbreaks, however, will result in the death and decay of extensive areas and quickly ruin large areas of turf when left unchecked.

Research has demonstrated that new seedlings are most susceptible to GLS 4 to 5 weeks after emergence, making the disease a significant challenge when overseeding with perennial ryegrass or in tall fescue, the two most popular choices for overseeding areas. 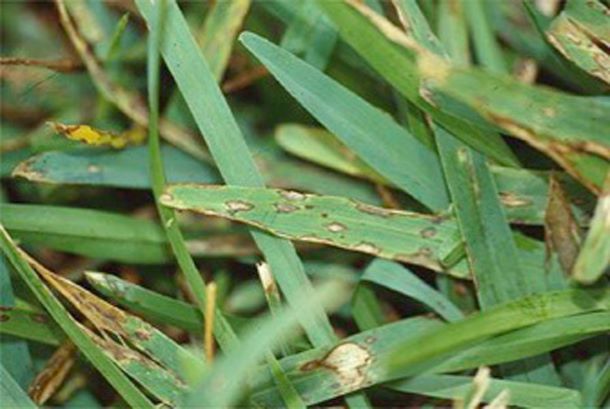 Symptoms on warm-season grasses such as St. Augustinegrass and kikuyugrass initially develop as small brown spots on leaves and stems.  The spots can enlarge rapidly into round or oblong spots and lesions.  Spots can extend across the entire leaf and leaves with numerous spots often die.  The spots are tan to gray and have a purple or brown margin.  As the disease progresses, stand symptoms appear as a general thinning or scorched similar to drought stress.

In perennial ryegrass and tall fescue, symptoms initially appear as small water-soaked spots that quickly turn necrotic.  The spots vary in color, size and shape, but are regularly gray to light brown in the center of the spot surrounded by a purple to dark brown boarder.  The spots are often oblong in shape and old spots may have a yellow halo.  As the disease progresses, entire leaves are blighted and may have a fish hook appearance.  GLS symptoms typically develop as small patches and may resemble dollar spot or Pythium blight.  Mycelium will not be present with gray leaf spot during dew formation in the morning.  The small patches can rapidly expand under favorable conditions and can be confused with brown patch.  Under intense disease pressure, large swards of turf maybe killed leaving behind resistant plants or weeds.  GLS symptoms in perennial ryegrass and tall fescue may also mimic heat or drought stress.

Gray leaf spot is most severe in newly established turf.  The disease is typically most severe in the first year of establishment, but then gradually becomes less damaging as the turf matures. 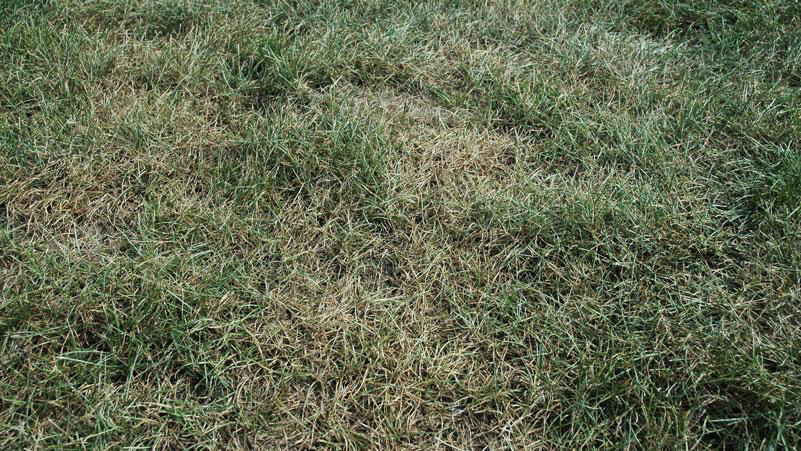 Turfgrass hosts vary widely in their susceptibility to damage from gray leaf spot.  Perennial ryegrass is most rapidly affected by the disease, with widespread turf loss occurring in a period of a few days.  St. Augustinegrass is most resistant, and rarely sustains significant damage if properly managed.  Tall fescue has an intermediate level of resistance to gray leaf spot.  In St. Augustinegrass, GLS is most active from June through August.  In tall fescue and perennial ryegrass, most cases of the disease appear from late July through September.

GLS may develop when temperatures are between 70 and 95°F, but the fungus also requires at least 14 hours of continuous leaf wetness in order to initiate infection.  Any factor that increases the amount of leaf wetness will increase gray leaf spot development such as extended periods of cloud cover, improper irrigation timing / frequency or extended rainfall events.  Lush leaf tissue produced by turf that is fertilized with excessive nitrogen is extremely prone to infection by GLS.

Despite all the doom and gloom mentioned in this article, GLS can be managed using a number of factors.  Many perennial ryegrass varieties have some resistance to gray leaf spot.  Varieties of tall fescue and St. Augustinegrass vary considerably in gray leaf spot susceptibility.  Perennial ryegrass cultivars with resistance to GLS are become readily available.  Refer to the results of the variety evaluation trials operated by the National Turfgrass Evaluation Program (NTEP) or local universities for those specific varieties with the best GLS resistance that also perform well in your area and environment.

Minimizing leaf wetness is another critical management strategy for GLS.  Relative humidity and leaf wetness are necessary for infection; therefore irrigating only during the morning is paramount for effective GLS management, so schedule irrigation for early in the morning, before sunrise, and never in the late afternoon or evening.  If possible, prune or remove trees to increase air movement and sunlight penetration. 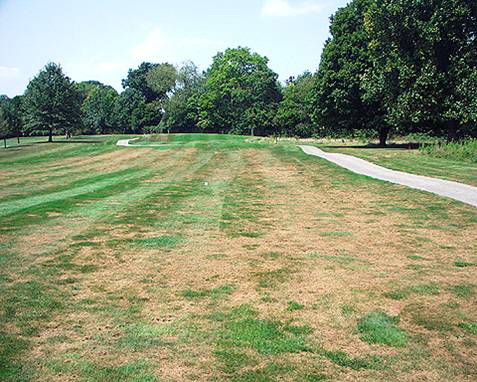 For cool-season grasses, any kind of stress will encourage GLS development.  It should be mowed to remove excess leaf tissue can limit the spread of the disease as will collecting the clippings.  Mow the turf to the recommended heights and use the “1/3 Rule” as a guide for mowing frequency.  Fertilization should be maintained to promote vigorous growth.  The GLS fungus produces a lot of spores and a healthy, growing plant is the best way to combat this disease.  Do not apply nitrogen to susceptible grasses in late spring or summer. When establishing a new stand of tall fescue or perennial ryegrass, use recommended seeding rates to encourage rapid maturation of new seedlings.

Proper mowing practices are absolutely critical for GLS management in warm-season grasses.  These grasses must be mowed frequently during the summer months to remove excess leaf tissue, keep the canopy open and dry and remove developing GLS lesions.  Again, collecting clippings reduces spread of the disease when GLS symptoms are evident.  Apply nitrogen and other nutrients as recommended to maintain vigorous foliar growth during the summer months.

Since practically all turf species can sustain serious damage in a short period of time, preventative fungicide applications are recommended for GLS control in professional turf management.  A preventative program should be initiated in mid-June or early-July in most locations, with repeat applications on a 14 to 21-day interval.  The turf should be monitored frequently for GLS development so that fungicides can be applied to stop epidemic development.

The Qol fungicide class has shown to be effective when the fungal population has not developed natural resistance.  Unfortunately, most populations have already developed resistance to this class of chemistry rendering them ineffective. Other effective products include thiophanate-methyl, chlorothalonil and combination products such as Headway, Concert, Lexicon and Armada.

Homeowners who are interested in the fungicide option should understand that results will often be erratic, but always expensive.  For best results, contract fungicide applications with lawn care professionals.

The products we recommend for controlling gray leaf spot are: