Hydroseeding is really a pretty simple process. Water, seed, fertilizer, a sticker called a “tackifier” and a protective mulch are mixed in a tank and sprayed onto the ground. 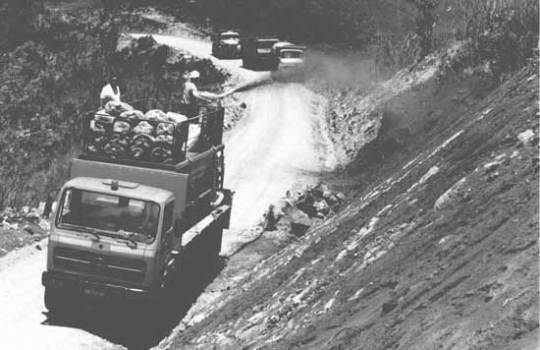 The first known hydroseeding unit was built by the state of Connecticut long ago. It was a jet type system and used peat moss as the mulch agent. When the Interstate Highway System was started during the Eisenhower administration there was a change in how roads were built. All of a sudden roads went through the hills instead of over them or around them. Conventional seeding techniques could not seed the steep hillsides created by highway construction and hydro seeding was the answer. Something else happened too! People noticed the grass that was planted with hydroseeding grew faster and better. 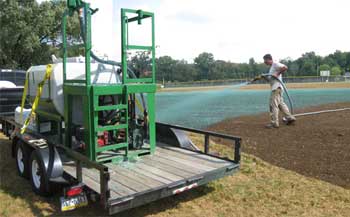 The early machines worked well, but were expensive enough that only big seeding jobs could be economically justified. In the last decade much more affordable machines have come on the market, and the advantages of hydro seeding are affordable to most any seeding professional. Well, let’s look at what exactly is in the mix that is sprayed onto a hydroseeding job.

Water in the mix acts as a carrier, and the contact of the seed and the water will jump-start the growth process. When extra fast germination is desired, it is also possible to pre-germinate seed for even faster growth.

Seed used in a hydro seeder doesn't need to be anything special. Nearly any seed can be used and at the same application rate as other seeding methods. These can include grass or lawn seeds, wildflowers, pasture seed, seed for athletic fields and seeds for erosion control such as crown vetch.

Fertilizer is usually used in the mix. A "starter" fertilizer that will stimulate root growth is the most commonly used

Dyed mulch is what gives a hydroseeding mix its color. Green is typically used. The mulch does more than just make it look pretty. It helps protect the seed, and to hold in moisture. It may be made from a paper or wood product or a mix. If any accidentally gets on your walkways, driveways or house, it will not stain and can be washed off, or will just disappear on its own.

Other products that may be added to a hydroseeding mix are products called tackifers that help hold the materials on a hillside in rainy conditions. They also help seal moisture in to the soil and lubricate the machine. A lime-based product is added if the pH needs correcting upward. Other products such as co-polymers that hold 100 to 400 times their weight in water and slowly release it as the moisture is needed, can also be added.

LebanonTurf offers our rhizosphere bacteria package to promote biofertility. This product is called ROOTS BioPam. It is used at economically low rates of about 5-Lbs per acre.

Lebanon Turf has a unique product that combines mulch with the starter fertilizer and the tackifier in one product call PennMulch. Conveniently available in one product, PennMulch is combined with water and the selected seed to create the hydroseeding mix.