Determine the number of weeds and weed species present in straw mulch used for turfgrass establishment.

This study was conducted in a greenhouse on the East Campus of the University of Nebraska-Lincoln. Temperatures were recorded by the greenhouse staff and recorded in a mobile app. The standard greenhouse potting soil mix was autoclaved and evenly spread over each flat. The soil was lightly compacted across the 48 flats and was watered twice daily by greenhouse staff. The study was established and watered beginning 2 Nov 2017.

At study initiation, 18-46-0 was applied at a rate 1.0 lbs. of P2O5 per 1,000 sq. This starter fertilizer was incorporated into the top 0.25 inch of the potting soil. The six different straw sources and Penn Mulch were then spread evenly on each potting soil flat to achieve 75% cover. All pots were watered being the first day, and watering was continued twice daily throughout the study.  Weed counts began on 10 Nov 2017. This included counting each individual weed that had germinated in the flat. These counts were done weekly until 20 Nov 2017. On 22 Nov and 30 Nov 2017, weeds were mowed to 3 inch height. On 30 Nov 2017 images were taken of each individual pot and digital analysis was done in Canopeo to determine percent cover. Study was concluded on 30 Nov 2017 (four weeks after study initiation).

After a week of twice a day irrigation, weeds began to germinate in treatments 1, 2, 4, 5, and 6. The garden store hay mulches (treatment 1, 2, and 5) had the most weeds germinate in that week (Fig. 1). Barley and wheat were the predominate weeds from the garden center mulches. The Holdrege hay field (treatment 6) had significant amounts of downy bromegrass germination. Two weeks after study initiation, the number of weeds largely increased for treatments 1, 2, and 6. The barley field (treatment 4) had a very slight increase. In the 3rd and 4th week, treatments 1, 2, and 5 continued to have additional weeds germinate. The Holdrege hay continued to promote rapid weed germination and establishment until the end of the study. The barley field (treatment 4) had very low weed seed germination during the first two weeks, but did not have any new weeds germinate during the last two weeks of the trial. Treatments 3 (brome grass pasture), 7 (Penn Mulch), and 8 (bare soil) did not have any weeds after four weeks of frequent irrigation.

Digital image analysis revealed that treatments 1 and 2 (garden store hay mulch) had approximately 20% weed cover after four weeks. Treatments 5 and 6 had the most coverage; 30% and 45%, respectively (Fig. 2). Treatment 3, 7, and 8 had little to no cover. Some of green detected in the DIA was due to green algae on the bare soil treatment or the green hues in the Penn Mulch product.

The diversity and number of weeds and species varied due to the source of the mulch (Fig. 3). Treatment 6 (Holdrege hay) had the largest number of species throughout the flats. Kochia, downy brome, common lambsquarters, and water hemp were identified. Treatment 4 (barley hay) had red clover, barley, and quack grass. Many of these weeds are particularly problematic and difficult to control in a cool-season turf/lawn. Treatments 1, 2, and 5 only had the field crop in which the straw was from (i.e. barley or wheat). These pose less of a concern because they typically die during normal mowing and turf management. Still, they are not desirable to be found in a newly established lawn.

The source of the mulch had an impact on the weeds germinated. Mulch from the garden stores seem to have the most weeds germinate besides the Holdrege hay field. Bare soil, Penn Mulch, and brome hay did not have any weeds. Thus, a homeowner should know where their mulch source is from and use Penn Mulch or another source that does not have weed seeds. The source of mulch will impact the amount and species of weeds in a homeowner’s lawn. 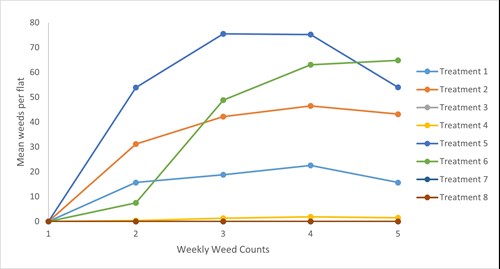 Figure 1. The average number of weeds counted in the six replications of each treatment. The first count represents the amount at study initiation and then the average counts the following four weeks. The Penn Mulch (treatment 7) and the non-treated control (treatment 8) were free of weeds after four weeks. LSD (5%) = 12.9 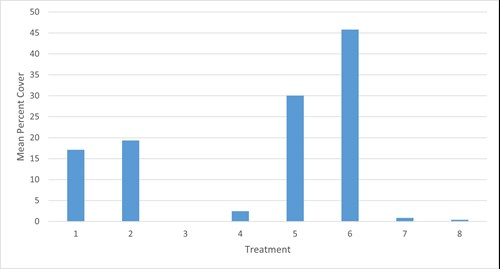 Figure 2. The mean percent weed cover, as determined with digital image analysis, four weeks after study initiation. The small indication of the Penn Mulch is a result of the green color of the material. LSD (5%) = 11.6

Figure 3. The average number of different weed species across the six replicate flats of each treatment. A list of the various weeds identified is located in the included Excel Sheet. 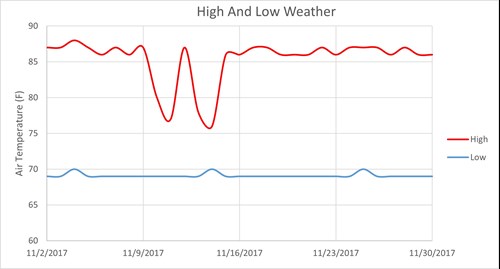 Figure 4. The greenhouse high and low air temperature during the four week trial. 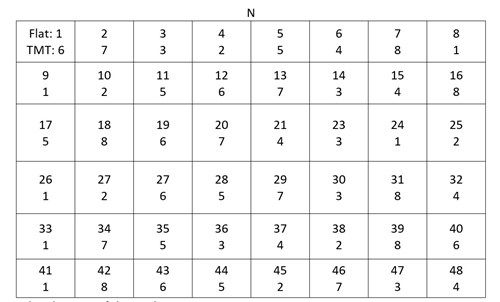 Figure 5. The plot map of the study.