For the most part, weed identification can be fairly simple.  Broadleaf weeds, and even most grassy weeds, are visually easy to distinguish from desirable turf even at early stages of growth.  Unfortunately that’s not always the case.  Case in point is Green Kyllinga and False Green Kyllinga; the perennial sedges that have plagued both warm- and cool-season turf throughout the country. 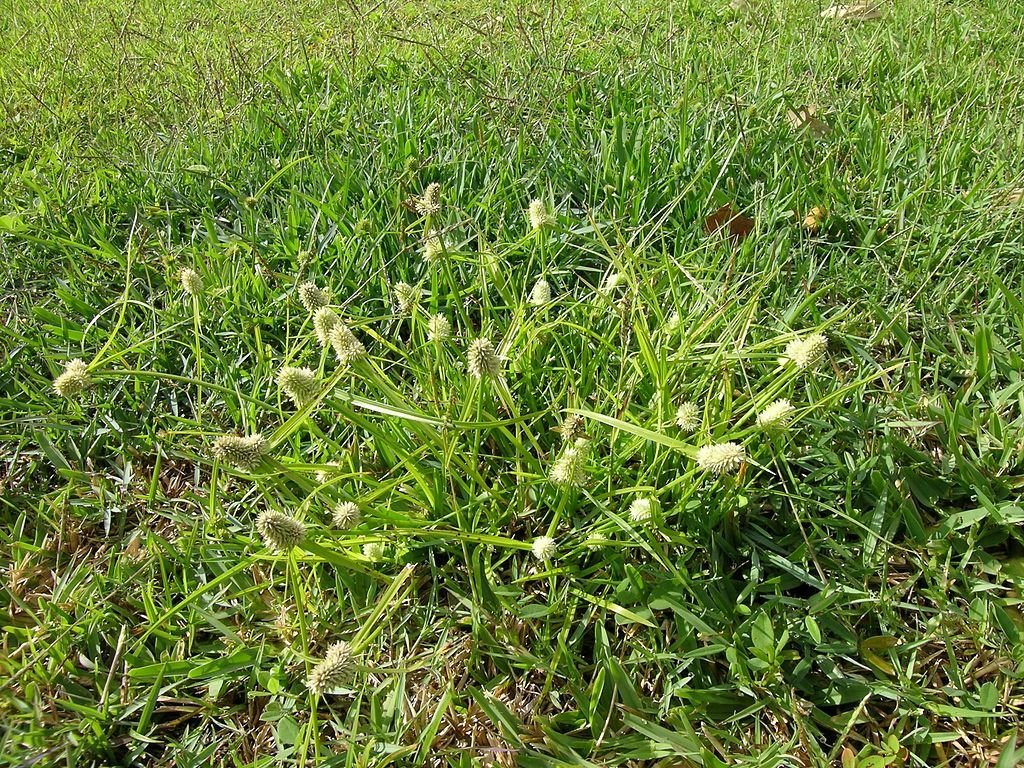 Green kyllinga (Kyllinga brevifolia) and false green kyllinga (Kyllinga gracillima) are very similar in appearance, but both are commonly referred to as “green kyllinga”.  Both species are yet another export from Asia, where many useful products originate and many of our most despised weeds got their start.  A members of the sedge family, green kyllinga has been well established in the deep South USA for over 50 years and, abetted by warm weather, has been spreading inexorably northward for years.  Green kyllinga is now a problem in coastal regions from Rhode Island to Florida, west to Texas, and along the Pacific in California.  False green kyllinga is more prevalent inland.  These kyllingas are practically indistinguishable by people who are not botanists equipped with microscopes.  One or the other or both have settled into cool-season turf.

At first, green kyllinga and false green kyllinga masquerade as a grass with fine, glossy, light-green blades.  The color is similar to that of their cousin, yellow nutsedge, however, there is a clear difference between these relatives.  Yellow nutsedge grows so erect that you can see it from two houses away.  Both species have a triangular stem and three-ranked leaf arrangement but Kyllinga crouches and grows in low clumps that expand slowly.  It can often thrive undetected by the turf manager, particularly during periods of active growth as it forms a dense turf-like mat via rhizomes.  If it is in your turf, you may not even notice … until it produces flowers. Then you can’t miss it. 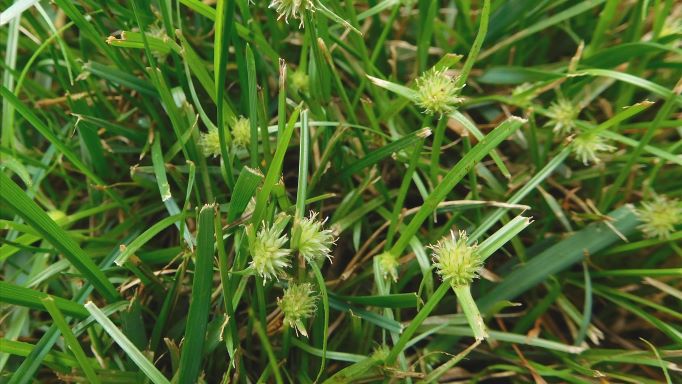 The flowers have a distinctive appearance.  The little flower tuft is about ¼ inch in diameter.  The tuft is composed of about 50 tiny flowers, each of which can produce a seed.  The flower tuft is surrounded by three long, narrow leaves that radiate from beneath the flower tuft.  The symmetry of these leaves makes kyllinga so easy to identify.  Kyllinga is way more noticeable in late August when it produces these flowers as growth slows and it goes off color. It becomes extremely noticeable during winter dormancy, which begins after the first frost.

Successfully managing and controlling green kyllinga is challenging to say the least.  Like other sedges, it thrives in moist soils, so controlling the amount of irrigation is one way to help mitigate it.  But in cases where chemical control is deemed necessary and the budget allow for it, there are few post-emergent herbicides that have shown decent control.  Imazosulfuron, sulfentrazone and halosufuron-methyl all have illustrated successful control of green kyllinga, some of which may require multiple applications to achieve the desired control.

Of course there’s always the ever-populated method of cutting out the green kyllinga and replacing it with seed or sod.  The kyllinga seed will continue to germinate and establish new patches, so hand weeding will also be needed.

It’s safe to say that green kyllinga is here to stay and will likely only continue to spread into more areas as the species produce variants that are tolerant to the environmental conditions.  With a little practice and knowing what to look for, you should be able to spot the infestation early and get a solid hold on managing it before it becomes a significant issue.