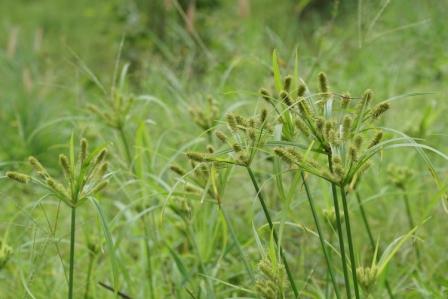 Yellow nutsedge (Cyperus esculentus) is a difficult-to-control weed that is often found in maintained turf areas. It is also called nutgrass, chufa or watergrass. It is helpful to keep in mind that yellow nutsedge is not a broadleaf weed or a grass, but a sedge. Understanding this plant is not a grass (even though it often mistaken for one) makes it easier to know how to control it. 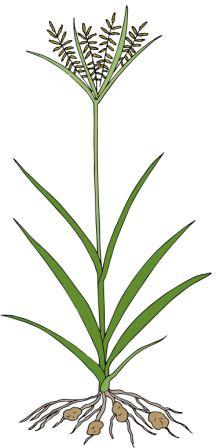 Yellow nutsedge is a perennial weed that reproduces primarily by underground tubers (nutlets) that form at the end of underground stems (rhizomes). A single plant can produce up to several hundred tubers during the summer. Yellow nutsedge can also spread by rhizomes. Yellow nutsedge grows actively and quickly during the hot summer months when turf (particularly cool-season varieties) grows more slowly. Yellow nutsedge typically emerges (germinating from tubers) in late April or May - significantly after crabgrass germinates. It grows actively throughout the summer until autumn’s first frost. The frost will kill the above-ground portion of the plant but the tubers will survive the cold weather and overwinter in the topsoil. Dormant tubers can germinate and emerge during the subsequent season. Yellow nutsedge can be identified by the characteristic triangular shape of the stem. Rolling the stem in your fingertips makes it easier to identify. Yellow nutsedge will produce a golden seedhead if left unchecked - though the seedhead seldom forms in turf mown frequently. 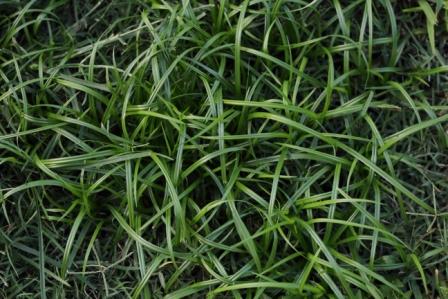 The best cultural strategy for controlling yellow nutsedge (and many other weeds) is to grow a dense, healthy stand of turf that can compete with weeds. Follow proper turf maintenance practices, such as fall fertilization, minimum irrigation, frequent mowing at the proper height, and over-seeding when needed. Yellow nutsedge is most often seen in turf mowed too short, and where soils remain moist from poor drainage or overwatering. However, yellow nutsedge can also be a problem in well-drained areas, particularly in thin turf.

Control with Herbicides
Herbicides may be required when large patches of nutsedge are present in the turf. LebanonTurf® does not offer any granular herbicide products recommended for established yellow nutsedge removal.
Sprayable herbicide options recommended for yellow nutsedge control contain halosulfuron (Gowan’s Sedgehammer®), sulfentrazone (FMC’s Dismiss®) or mesotrione (Syngenta’s Tenacity®). Follow label directions about when to make initial and follow-up applications. Regardless of herbicide selection, yellow nutsedge is a difficult-to-control weed that may require multiple herbicide applications.